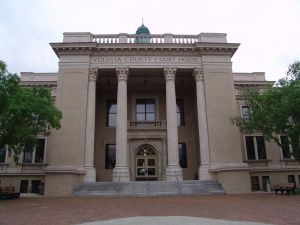 The bail bonds process is designed to prevent individuals from being held in jail without due process while ensuring that they return for future court dates. The bail amount is set by the court, and a specific percentage must be paid for the person to be released. If he or she does not appear in court as scheduled, the entire bail amount will be due.

If you or a loved one has been arrested, trust the assistance of Bob Barry Bail Bonds, the oldest bail bond company in the Volusia County with a convenient Daytona Beach location.

In Volusia County, when a person gets arrested, the police officer will take them to the Volusia County Jail. The booking process takes approximately two to four hours, after which the person’s bond information will appear on the jail website. They can then use a bail bond, except for instances where they have to face the judge directly who will then set the bail.

THE ROLE OF A BAIL BOND COMPANY

REQUIRED DOCUMENTS AFTER A RELEASE

When obtaining a bail bond for a loved one, you must bring your driver’s license or another official ID along with a form of payment. You will then sign paperwork to guarantee that the arrested individual will appear before the court on all the appointed dates. Once we ensure that the arrested individual is not a threat, we stand as the assurance. If he or she does not attend court as promised, you will be responsible for the full cost of bail.

THE ROLE OF A BAIL BOND COMPANY

Bails are set based on a variety of factors, including the charges levied against the arrested individual. In many cases, the bail amount is so high that the person is unable to raise the funds he or she needs to be released from county jail. If you or a loved one is in this situation, you can rely on our affordable rates and quick operation.

Affordable rates are set at $100 for all bonds less than $1,000 and 10 percent for bail exceeding that amount. Simply visit our office with your form of payment and an official state ID. We also offer notary services and monthly criminal warrant checks.

At Bob Barry Bail Bonds, our respectful, knowledgeable staff of licensed bail bond agents in Daytona Beach will be happy to answer all your questions about the bail bonds process. Since we know that arrests can happen at any time, our bail bonds are available 24 hours a day, seven days a week.